Gym Mats for Sale—With a Story 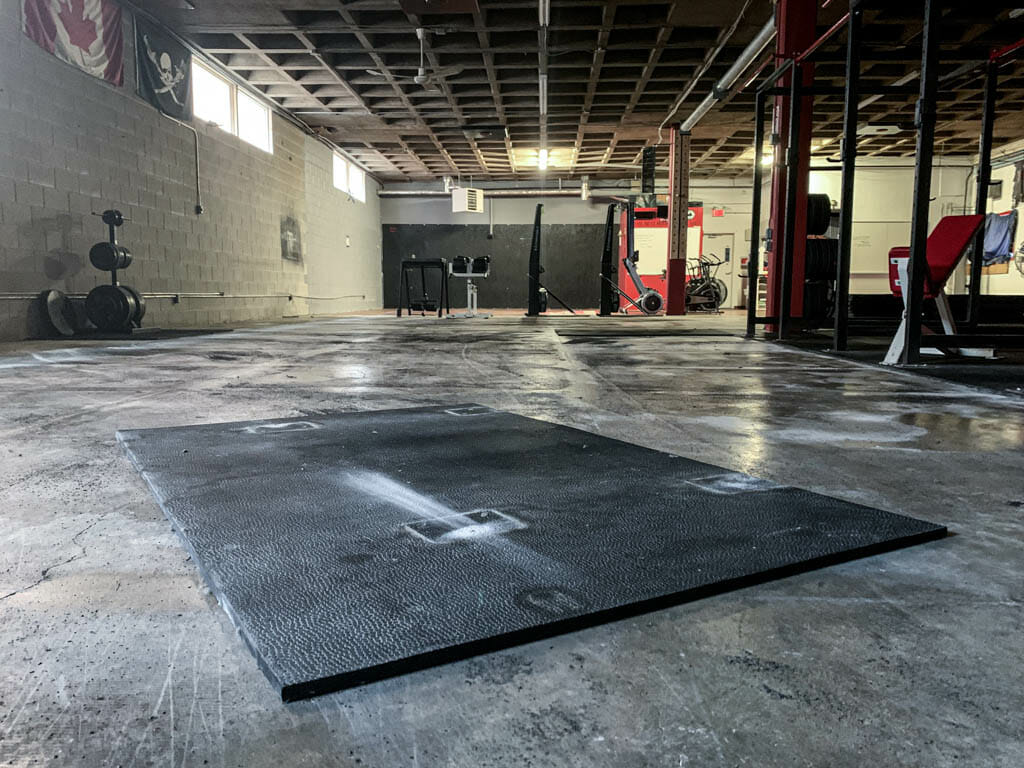 “Is that blood?” Dave Castro asked.

We were at Westside Barbell in Columbus, Ohio, and Dave was standing in the monolift, looking down at what was very clearly a puddle of dried blood.

If you’ve ever heard about Westside, you’ll know it’s an extreme place for extreme people—people who want to squat 1,000 pounds or more. They work toward that goal in the monolift, a rare piece of powerlifting gear that allows you to unrack a ridiculously heavy bar without moving your feet. The squat rack actually moves for you because it’s really hard to take a step with 1,200 lb. on your back. Or so I’m told.

When you try to squat more than 1,000 pounds, nosebleeds are not uncommon, and Dave was looking at a crusty stain of effort and determination.

Our squat rack never saw any nosebleeds. We trained to be strong but not unbelievably strong, so there’s less biological evidence of our effort.

But a lot of amazing things happened on this mat over the last nine years. It was the one that sat under the power cage, and it’s accommodated a lot of determined people over thousands of workouts.

I’ve hit PRs on this mat, and I’ve watched people hit hundreds of PRs here—including first pull-ups on the bar above it.

It’s probably no more special than any of the 150 other mats in the gym. They’re just 4 foot by 6 foot 3/4-inch rubber horse stall mats. They all have a story to tell. I can remember a lot of workouts in particular locations around the gym, and I can remember lots of special moments in a general area. Great things happened daily all over the gym.

But I know the whole story of this exact mat, and I helped write it.

The Story of Our Floor

I wanted stall mats after hearing Greg Amundson talk about how seeing them in a garage fired him up to train. Greg worked out at the original CrossFit gym, and I watched him online with awe for several years until I actually got to meet him and eventually work with him.

Back then, gear was harder to come by, so I couldn’t just go on the Rogue site and order special gym flooring with flecks of colour. I turned to the agriculture world and found stall mats for livestock. Or lifters.

I laid this flooring incorrectly after it rolled in on giant pallets. I started with the row on the south wall, including the mat you see in the picture above. Years later, I found out this was the wrong way to lay flooring. You’re supposed to start in the middle.

One of our power cages was bolted right through this mat, and it never moved for 9 years. It was a constant, while some of the other mats shifted about or traded spots.

Literally thousands of times, people stepped on this mat and decided they were going to be glorious, indomitable titans.

And I’m not talking about huge loads, either. I don’t care about the big numbers any more than the smaller ones. All I care about was the will power shown on this mat. I don’t know if objects absorb emotions, but if they do, this one is soaked in courage.

It was also my happy place.

Those who know me understand that I dislike conditioning. I can’t stand running, and I’m not thrilled with long, grinding workouts that make you breath hard. I also don’t prefer short and medium workouts that make your lungs burn. In fact, I’m generally uninterested in every element of fitness that involves more than 8 reps.

Don’t get me wrong: Those conditioning workouts are key to health, and I did them because they’re good for me. Really good. Like life-saving good.

But what I really enjoy—what I love—is lifting heavy stuff in sets of 1-5 reps and then bantering with friends during lengthy rest breaks. I did a lot of that on this mat, especially on Sunday mornings, when I treated myself to some low-rep grunt work after a week of conditioning.

I know the story of this mat isn’t done. It’s going to have a new home. I’ve got work to do on this mat.

And 204 isn’t done either. Far from it. Our online programs are up and running, and they’re amazing. Here’s the best thing we’ve heard from numerous people we’re coaching at home:

“This is so convenient. I’m working out way more often now.”

That warms my heart.

Last week, Crystal and I drove around dropping off some of our treasured gear to people who are now going to use it to get fit in their homes. And as I drive around the city, I love knowing “there’s a squat rack and a strong woman in there” and “that house has a barbell and a guy who loves to lift it.”

Next weekend we’re going to sell a little of our gear—the things that haven’t been rented as part of our home gym builder program. Our members will get priority, and we’ll post a list of items in the Pirate’s Only group shortly. Once we do, members can email us requests, and we’ll draw names if multiple people want the same things.

You must be available to pick anything up between 10 and 2 on Sunday, July 12.

If anything is unsold by Friday morning, we’ll let the larger fitness community know.

Right now, we have 4 x 6 foot 3/4-inch mats available to the 204 crew. We got the thickest ones we could to prevent damage to the floor—and they worked perfectly for almost 10 years.

They’re as good as the day I laid them down in June 2011. Great things have been done on each one, with more great things to come in your garage or basement.

The Perfect Time To Begin Is Now

It’s a mistake to wait for everything to be “perfect” to begin your fitness & nutrition journey. Life is a laundry list of events, holidays

Grocery-Store Hacks That Add up to Huge Savings

Is there anything you can do to lower your grocery bill as food prices rise? Yes! Check out this list of essential shopping tips.

Meal-Plan Your Way to Savings at the Grocery Store

Inflation taking a bite out of your budget? Here’s how a meal plan can help you cut costs at the grocery store.

Fill out the form below

Learn more about how joining our community can help you reach your health and fitness goals.

Learn more about our membership options

We offer membership options starting at just $185/mo. Learn more about our pricing options by clicking the button.